jen and i finally had our follow-up cake lab yesterday. our synth... the red sh-101:

the base was 2 8" square chocolate cakes, which jen cut and reassembled into the correct shape. she whipped up some sugar cookie dough to make the keyboard, which worked out really well. luckily, the kitkat black keys worked really well, scale-wise. i used most of a large bottle of red food coloring to get that special sh-101 red, and made a stencil of the sh-101 logo. the sprinkles looked pretty awesome, although the stencil only works so well and there was a lot of clean-up with tweezers. and then lots of decorating, with rolos, andes mints, tic tacs, black and white gel frosting, and a sugar cookie wheel. 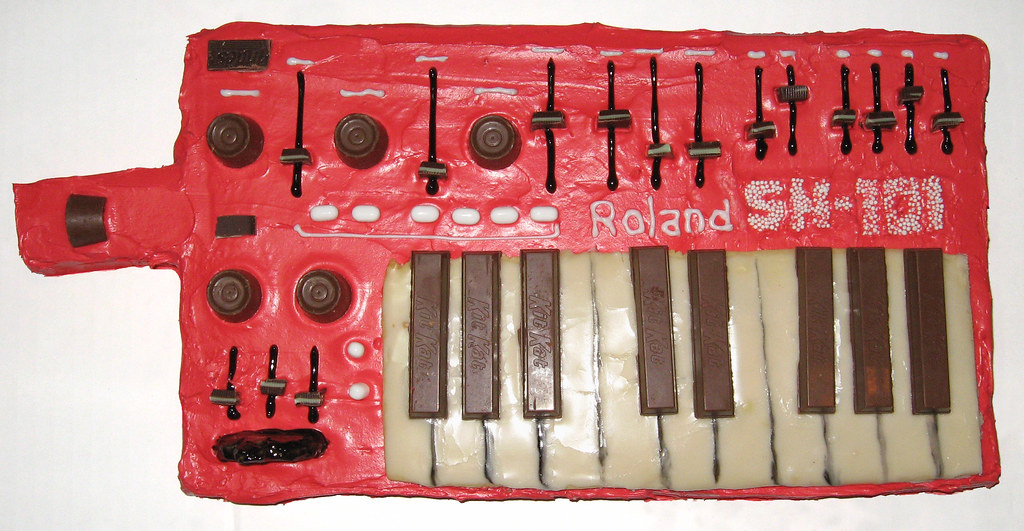 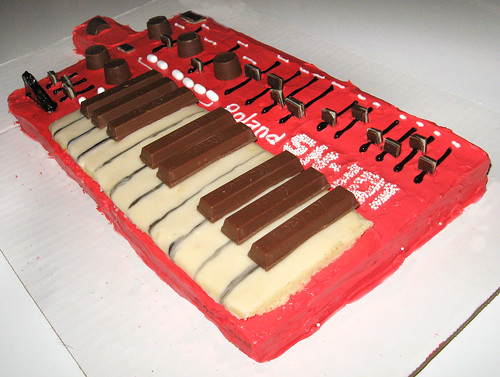 and so you can get an idea of the scale: 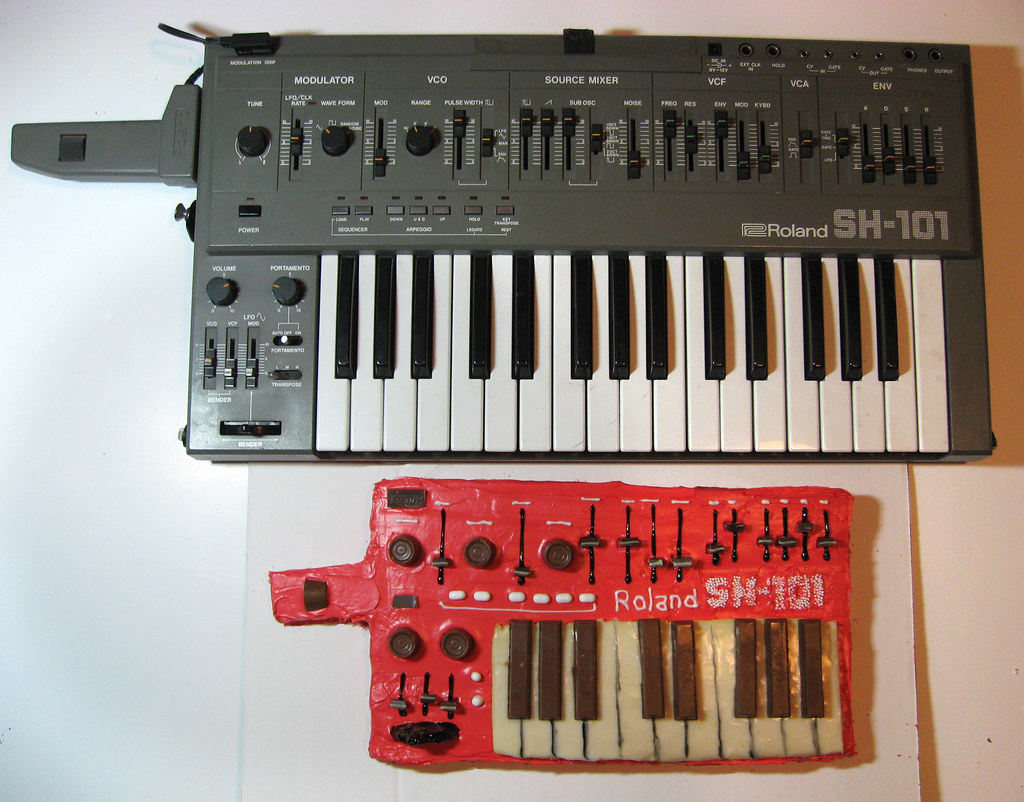 the cake will be enjoyed/eaten tonight at the b-side at 8-ish. don't miss out!!

jen brought our masterpiece to the show last night, and we served it up between the chop chop and lifestyle sets. most people thought it was pretty tasty. the oppenheimer boys were excited about the use of cadbury chocolate.

i have ideas and plans. the next cake is going to be even better. stay tuned.

so jen and i have a new hobby! when the boys get together for synth lab, we are going to have cake lab, and today was the first event. our project:

the how-to:
we started out with a trip to shaw's and iparty for our supplies. then while jen made the cake, i made molds out of tin foil and wax paper for the wood sides. i melted peanut butter chips and applied that to the wax paper with a pastry brush for the woodgrain, and filled in the molds with a dark chocolate/peanut butter mixture and stuck them in the freezer to solidify. while the cake was baking, jen made the dmx logo out of this crazy microwaveable white chocolate-in-a-squeezy-tube, on wax paper taped over the actual drum machine's logo.

some problems:
due to some too-small print on the cake mix box, jen used 1/2 cup too much water in the cake mix. we figured we'd add another egg to make it a little more solid. we probably should have added some flour too, but having just moved and all, i don't have any flour here yet. the cake came out ok, but then fell a good deal, so it was not really quite as tall as it should have been.

then:
after the cake had cooled a bit, i did a bit of cutting-and-pasting to turn the cake-shape into a drum-machine-shape. this was kind of tricky, given the decreased cake height. then i got the smart idea to fill in some gaps with the leftover melted chocolate. this turned out to not be a smart idea, because it did not really solidify, and make it really tricky when it came time to frost the cake. anyway, the frosting was good at evening out the surface, i had to stick it in the freezer a couple of times to thicken the consistency so it would be easier to work with, but all in all it made a pretty good spackle. i was glad we had picked up a special frosting spatula.

another problem:
we had gotten black spray-on food coloring, the kind that had worked so stupendously on ad's birthday cake. but it did not like this frosting so much and just sorta collected in little black puddles. i guess it really only works on that that super sugary store cake frosting. so we had to go with dark brown.

the details:
we decorated it up. helpful hint: squeezy icing tubes are a lot more easy to work with if you microwave them for 10 seconds. microwaving also makes breaking up chocolate squares easier.

the finishing touch/another problem:
since the cake was somewhat shorter than expected, i had to trim down the "wood" panels. i also realized that i made them both with the woodgrain facing in the same direction, instead of opposite sides. doh.

the verdict:
all in all it was a good practice run, and it came out pretty well considering our technical challenges. next time we will kick even more ass.

we presented it to the boys, who were pretty impressed at what geniuses we were. we took some pictures, but i can't find the cable to my camera, so we'll have to make do with this crappy cameraphone pic until jen can post some of the ones tony took with his real camera.

there's more:
this cake will be on display and eaten at tomorrow night's chop chop/oppenheimer show! you don't want to miss that!
Collapse